Shuttle Valve Structure & Application: Main Function
Usually there are one or at least two inlet ports of shuttle valve, the hydraulic fluid will be able to choose automatically to exert from one inlet port with a comparison of higher pressure and

out from the outlet ports. The graphic symbol of shuttle valve looks likes a combination of two one way check valve, but there is a subtle and very important differences. When a shuttle valve (Picture-A1) is working, the pressure at outlet port P2 is impossible higher than inlet port P1 and P3 simultaneously. But as a combination of two one way check valves  (Picture-A2), if there is no fluid flow at outlet port 2 (only if one control port), the pressure at P2 port will maintain its value even if pressure decreasing at P1 and P2 port.

a. The SV1 shuttle valve in the break system allows the break always connects to with higher pressure side of hydraulic motor. If the pressure exceeds the pressure of brake spring, the break is released in order to rotate the motor. When the spool of directional control valve D1 in the middle, there is no pressure at each side, the brake is automatically blocked at the moment.

b. The hydraulic motor for crane winch drum drive (Picture-A10) requires the break to be released when the driving pressure is higher, the break valve B1 can be used with a bias spring structure, the shuttle valve SV2 should maintain The B1 inlet port always connects to the higher pressure side of hydraulic closed loop. Please refer to Picture-A11. 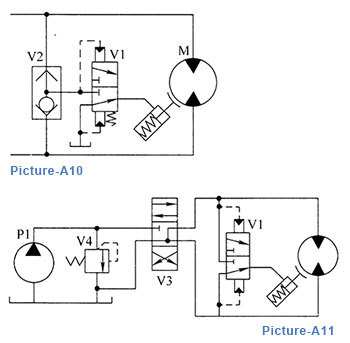 To elect the higher pressures from multiple loads , pass it to a variable displacement pump control mechanism, as the basis for maintaining the pump outlet pressure . Thus, almost every piece of multiply-valve must be equipped with a shuttle valve.

The Picture-A12is an example of driving four actuators. The pressure signal of A4 and B4 load transmitting to LSI must go through five shuttle valves.
Common excavator hydraulic circuit needs to drive 7~8 actuators and there are 7-8 piece multiply valve with 7,8 two-inlet shuttle valves. In this case, the structure of multiply-valve can be simplified if multiple-inlet shuttle valve installed, and is said to improve the multiply valve response due to the more common two inlet valves in series connection caused of slowing response problems.

Shuttle Valve Feature:
When selecting shuttle valve, the allowable pressure, differential pressure and flow characteristics and inner leakage should generally pay attention.
According to different applications, there are some special requirements. For example, shuttle valve for load-sensing circuit, the response is the first key to be consideration. Theoretically speaking, it is just a pressure transmitting signal, no flow, but in actual application, there are a few of flow rate though it, thus, it will affects the pressure drop should be considered, especially when more than one series connections.
For hot oil discharging in a hydraulic closed circuit when there is a certain flow requirements, sensitive response is not so important there.
And when used in the brake circuit that has a certain flow requirements, but also requires a certain response sensitivity.
The test to shuttle valve is similar to the hydraulic check valve, please click: Hydraulic Check Valve Testing.