About Hydraulic Flow Control Valve, How To Test

What Are Hydraulic Flow Control Valves And How To Test 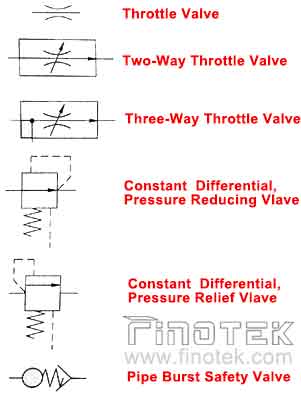 1) Throttle Valve, the hydraulic flow area can only be changed according to external instructions such as manual operation, mechanical or electronic control, so the actual flow through the valve is affected by the pressure difference across the valve.

2) Two-way hydraulic flow control valve, referred to as two-way flow valve, its flow area can change with the pressure difference between the two connection side of the flow valve within a certain range, to keep the flow through constant, so it is also known as pressure compensation (pressure -compensated)

Throttle control, it is often referred to as a speed control valve, in fact, it is sometimes used only to regulate the flow and is not used for speed regulation.

3) Three-way hydraulic flow control valve referred to as three-way flow control valve, the flow chamber of the priority oil chamber and the bypass oil chamber be changed as per the different pressure of each port, to achieve flow regulation, which is not the same processing like the pressure relief valve for speed control. 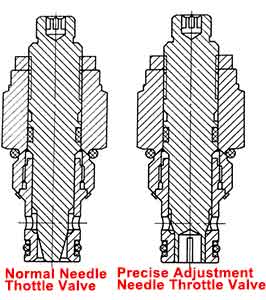 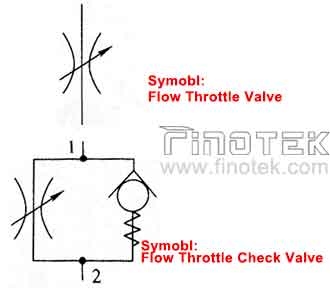 Because the throttle valve is mostly operated by a cone shape poppet with a very small angle, it is often referred to as a needle valve. It has a simple structure and low cost, and can be completely closed.However, with the improvement of technology, there are some needle valves that are not at all like needles: with a cylindrical spool, which has a regulation indication scale for better flow adjustment precisely.

From a functional classified the hydraulic flow valve can be divided into the following two types:

The A throttle valve is used as an inlet throttle to control the speed at which the hydraulic cylinder overcomes resistance while the cylinder rod in and out.
The use of two one-way throttle valves at port B serves as an outlet throttling to prevent the cylinders from moving too fast. 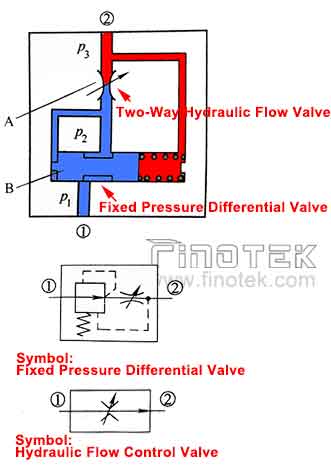 The pressures p2, p3 of the throttle valve are setting at both ends of the constant pressure differential spool. The poppet moves under these two pressures and the spring force and stops at the equilibrium position, so that between these two pressures, the difference, that is, the pressure difference across the throttle valve, maintains the constant-spring pressure. In this way, the flow through the valve can be kept relatively constant, independent of the pressure of the valve.

When the oil reverses ②->①, it is like a throttle valve. Because, at this time, due to p2<p3, the constant pressure differential valve poppet will move to and stay at the left end side under the action of the spring force, and the valve port will be fully opened and the flow regulation is not being adjusted at the moment.

In addition to the adjustable orifice, there is also a throttle orifice that can not be adjustable, but a constant pressure differential spring pre-tightening force is adjustable Because, when the oil is reversed flowing, the normal two-way hydraulic flow valve operates like a general throttle valve. Therefore, in order to reduce the flow resistance, there is also a valve with a reverse flow check valve. There is also an electric proportional type flow control valve, which can be adjusted by electric signals. Below this pressure difference, the flow cannot be maintained without being affected by the load pressure.

Connect the recorder: flow qy7 as the Y axis and pressure p5 as the X axis. To make the oil temperature reach the predetermined value, usually choose No. 32 hydraulic oil, at 40 °C.

Keep the oil temperature relatively constant throughout the measurement process. The test curve thus obtained is the characteristic of the valve under the working conditions.